Traffic light Controlled road systems are often used to control the flow of traffic on busy junctions and roads. 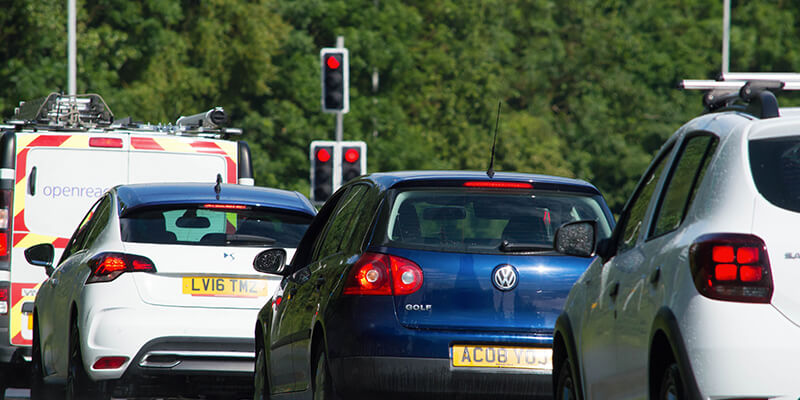 How are Vehicles Detected at Traffic Signals?

Vehicle Detection at Traffic Lights will either be via an inductive loop system buried in the carriageway, above ground units mounted above signal heads, or a pedestrian push button demand, as described above. Often traffic lights for junctions have a puffin/toucan/pegasus crossing incorporated as-well. The belief that flashing headlights at traffic lights will give a green light is simply not true. Drivers should approach the lights with due care and attention and be aware that they may change from green to red at anytime. From a red light, red and amber are displayed, meaning get ready to go and drivers should only proceed once the lights have turned green.

Contrary to popular belief, carriageway loops do not work off the pressure of vehicles passing over them. They are in fact inductive loops which work by detecting metal objects (such as vehicles) that pass over them. Vehicles passing over the loop causes a change in the magnetic field that is induced in the loop for the time taken for the vehicle to pass over the loop. This change in magnetic field causes a pulse which registers as a vehicle demand in the controller. This inductive loop is either a square, diamond or angled shape.

Loops can also be used to provide right-turn filter arrows. These work by detecting vehicles waiting on the loops and hence generating a change in the magnetic field in the loop. Once a vehicle has been sat on the loop for a pre-set time (usually 4s), a demand for the right turn arrow is registered in the controller. If the vehicle moves off (by turning in a gap) then the demand is cancelled when the loop has been unoccupied for a pre-set time (usually 2s).

Microwave detectors are usually mounted on top of signal poles and vehicles can be detected anywhere within the field of vision as long as the vehicle is travelling faster than 2-3mph. In cases where a slow-moving queue occurs, the approach should also have a loop at the stop line to ensure that traffic is detected.